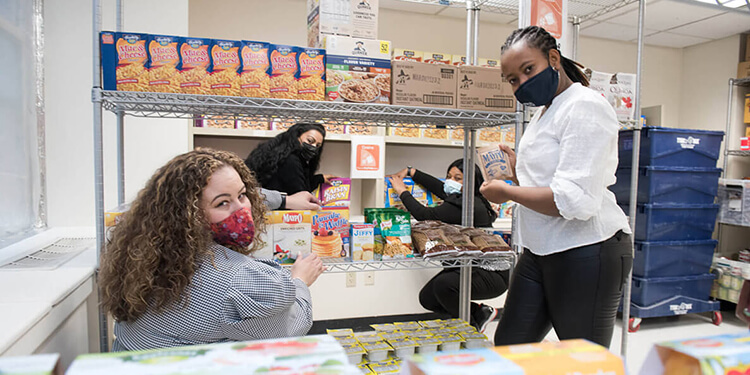 “Food insecurity is unfortunately one of the challenges faced by students not only at Berkeley College, but across America,” said Michael J. Smith, President of Berkeley College. “COVID has exacerbated this unfathomable inequity and has imposed additional hardships on every one of our students. As a result of the pandemic, three in five college students are facing food insecurity, according to a study conducted by the Hope Center for College, Community and Justice.”

President Smith thanked the Berkeley College Foundation and its donors, the Food Bank for New York City, as well as the guest speakers and attendees for their support of this important initiative to alleviate food insecurity among the college student population.

Adrian A. Council, Sr., Co-founder & Publisher, The Positive Community magazine, spoke about the endurance and impact among inspiring leaders such as Nelson Mandela. “(Mandela) was in prison for 27 years. (He) fought to end poverty and hunger in the continent of Africa and the world. To overcome poverty is an act of justice,” Council remarked. “Berkeley College and the Food Bank for New York City are coming together to be a positive force for change for our students.”

Jessica Walker, President and CEO, Manhattan Chamber of Commerce, noted the hardships that so many New Yorkers have faced over the past year, getting through to the brighter side. “During these times, we’ve seen the best among us stand up, stand out and shine,” said Walker. “Berkeley College is showing a lot of community leadership and foresight in providing tremendous help for students and for New York City.”

Berkeley College Foundation, Inc. is a 501(c) (3) tax-exempt corporation. Contributions are tax-deductible to the extent permitted by law.