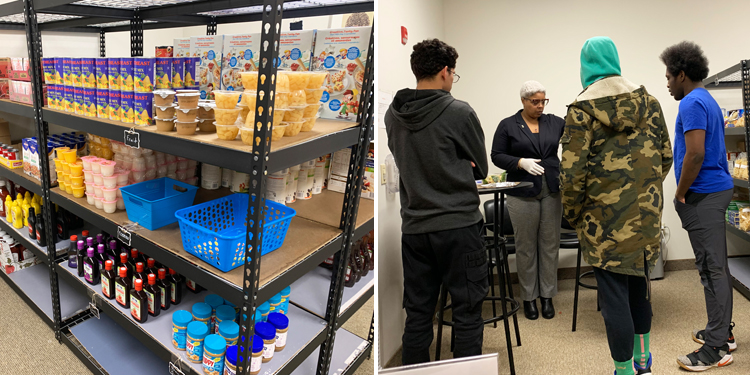 The Berkeley College Foundation recently observed the first anniversary of its on-campus food pantry, a resource that was launched in January 2019 to address food insecurity. More than 650 campuses nationwide, as well as 20 colleges in New Jersey, offer food pantries to address the growing economic challenge in higher education.

The Community FoodBank of New Jersey estimates that one in three college students in the Garden State faces food insecurity. According to a study by Feeding America, Essex County has the highest rate of food insecurity in New Jersey.

The food pantry, located at Berkeley College’s Newark campus, was made possible through a $10,000 donation from the Foundation.

To date, more than 400 Berkeley College students have utilized the pantry, which offers 30 items, including pasta, tuna fish, granola bars, rice, canned vegetables and more. Through a partnership with the Community FoodBank of New Jersey, the Foundation receives pantry items at a discount. The resource is open three days a week to Berkeley College students from all campuses.

“The food pantry has been an important addition to my life over the past year,” said Al-Samir Greene, a resident of Newark, NJ, who is studying General Business at Berkeley College. “Students are thankful for the resource. I currently work two jobs and sometimes still struggle to make it through the week.”

The mission of the Berkeley College Foundation is to provide financial support for student success, including through scholarships and educational enrichment.

Berkeley College Foundation, Inc. is a 501(c) (3) tax-exempt corporation. Contributions are tax-deductible to the extent permitted by law.